Embassy of Sierra Leone, in the state of Kuwait. 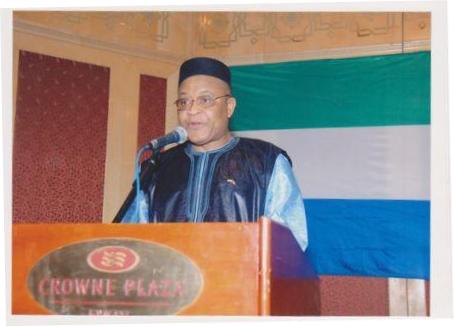 The Embassy of Sierra Leone in the Gulf State of Kuwait on 27th April, 2011 hosted a well attended diplomatic reception marking its country’s Golden Jubilee at the prestigious Crown Plaza Hotel in Kuwait city.  (Photo:  Ambassador Ibrahim Bakarr Kamaradelivering his Keynote address at a reception hosted at the Crown Plaza Hotel)

In his speech, Ambassador Ibrahim Bakarr Kamara conveyed affectionate greetings from His Excellency President Ernest Bai Koroma and the people of Sierra Leone to the Amir of Kuwait, His Highness Sheik Sabah Al-AhmedAl-Jaber Al-Sabah, the government, and its people.

The Ambassador paid a glowing tribute to the founding fathers and mothers of Sierra Leone and all those who fought for the country’s sovereignty from British rule leading to independence on 27th. April, 1961.

He expressed appreciation on behalf of his government to the government and people of Kuwait for taking part in their historic celebrations. 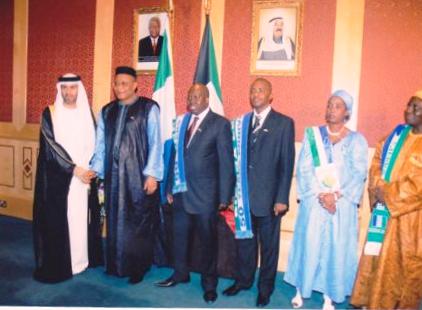 Ambassador Ibrahim Bakarr and his Diplomatic Staff receiving guests to the Reception at Crown Plaza.

“This is a great manifestation of the strength of our partnership and commitment to cherish values of freedom, independence, peace and international co-operation,” he said in his address.

The envoy recalled the role played by Sierra Leone during the war of Liberation of Kuwait in 1991.  He also expressed profound thanks and appreciation to Kuwaiti leaders – His Highness Sheikh Sabah Al- Jaber Al-Sabah, the Crown Prince, Sheikh Nawaf Al-Ahmed Al- Jaber Al Sabah and the Prime Minister, Sheikh Nasser Al-Ahmed Al Mohamed Al Sabah for their efforts and support in fostering and bolstering the bond of friendship existing between the two countries.

Speaking on the theme “50 Years forward, celebrating a new Sierra Leone,” Ambassador Kamara gave retrospective and introspective analysis of the successes his country has made inrecent times.

He informed them about President Koroma’s “Agenda for Change” and some of the recent developments taking place in the country ranging from infrastructural developments, electricity, press freedom to free health care delivery for children under five, pregnant women, lactating mothers, etc.

“We are revitalizing our private sector as our engine of growth. We are attracting investment in many sectors of our economy and fighting corruption and drug trafficking,”the Ambassador reiterated to his audience".

He used the opportunity to inform his audience that Sierra Leone is no more a war-torn country, but a country enjoying peace and tranquillity with a democratically elected president.

The Ambassador revealed to his audience some oft he unique qualities Sierra Leone enjoys as a nation – religious and political tolerance, peace and security, freedom, justice and inter ethnic harmony, among others.

He called on Kuwaiti nationals and other friendly countries for partnership in the expanding opportunities in oil, iron ore, tourism, bauxite, gold, diamond, agriculture and infrastructural development.

In his concluding statement, he thanked the International Community and all those who stood by the country at the critical moments of its history and assured that Sierra Leone will continue along the path of peace, democracy and development and that she will deliver on her international commitments, urging all his nationals to be proud of  the “Land that we love our Sierra Leone.  The only Sierra Leone in the World.”

Representing the Emir of the State of Kuwait at the celebration, the Deputy Minister of Foreign Affairs, His Excellency Khaleed Al-Jaralaah expressed happiness for taking part in the historic celebration, adding that, the occasion’s importance was not only to Sierra Leone, but Kuwait as well.

Minister Khaleed further expressed on behalf of the Government and people of Kuwait happiness for the opening of the Sierra Leone embassy in Kuwait and assured that the State of Kuwait will soon open its embassy in Freetown. 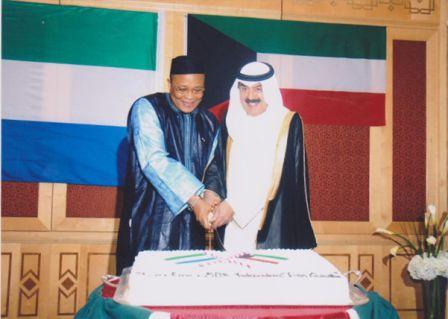 The cutting of the Anniversary Cake by the Ambassador and the Deputy Minister climaxed the occasion. 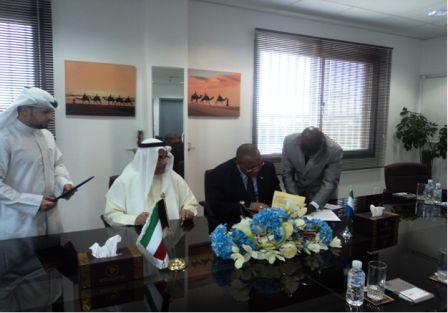 In a brief telephone interview last night, HE Ibrahim Bakarr Kamara, said his government will sign a 15 million dollar loan with the Kuwait Fund at an official ceremony in Freetown on 30th May, 2011.

The money, according to Ambassador Kamara, is for the procurement of diagnostic equipment and logistical support for three hospitals in Sierra Leone, with the sole aim of boosting the country’s health sector in line with President Koroma’s “Agenda for Change”.

The Ambassador also affirmed that he recently represented Sierra Leone’s interest in securing a grant of US$ 3 million from the Resources of Kuwait Good will Fund for the promotion of Food Security in Islamic Countries.

“I would also lead a high-profile delegation of the Good will Fund to Freetown in the next few days where they will map out strategies for the utilization of the said fund,” HE Ibrahim Kamara disclosed.

In another related development, the Ambassador has signed an Air Services Agreement between the Republic of Sierra Leone and the State of Kuwait.

In his drive to attract investors and Asian tourists to Sierra Leone, the Ambassador said he had been a guest in many media institutions in Kuwait to explain to Kuwaiti public that peace and tranquility has finally returned to Sierra Leone.

Since the word ‘war-torn’ has been the major reason for some investors and tourists turning their backs on Sierra Leone, the Ambassador added, ” I have made it very clear to them that Sierra Leone is one of the safest countries in West Africa as people go about their normal business activities at any given time without hindrance and the country is ready for business.”

The Ambassador said he had assured investors tha this government had implemented measures to protect them and their investments, adding that, his clarion call for potential investors to go and invest in his country will soon start yielding dividends.

“I also informed them that Sierra Leone is now one of the top five countries in Sub-Saharan Africa when it comes to investor protection and the ease of starting a business,” he concluded.

Oops! This site has expired.

If you are the site owner, please renew your premium subscription or contact support.